Yvonne and I connected via a Facebook group that enjoys discussing all things Ancient Greek, where I had been sharing photos from my trip to Athens just at the time that her historical novel ‘Pericles and Aspasia’ was published. I quickly read the book and knew I wanted to get Yvonne’s voice on the Podcast. In our conversation we covered a wide range of Ancient Greek subjects, just as her book does, from the nature of democracy to the first performance of Antigone, from the golden statue of Athena and the building of the Parthenon to how small details of ancient life can be woven into a thrilling story. Yvonne was a delightful guest who could not help but let her love and deep knowledge of her subject shine through.

Yvonne Korshak received her BA cum laude from Harvard, and her MA in Classics and Classical Archaeology and PhD in Art History from the University of California, Berkeley. As a professor at Adelphi University, she has taught Art History and topics in the Humanities, served as Chair of the Department of Art and Art History, Director of the Honors Program in Liberal Studies and Director of a National Endowment for the Humanities Summer Institute. She has written and spoken widely on topics of Greek art and archaeology and on European painting, particularly on van Gogh, Courbet and David. Her blog, “Let’s Talk Off-Broadway,” focuses on art and theater. She has excavated at Old Corinth, Greece and, to write this novel, has followed in the tracks of Pericles and Aspasia, visiting almost all the cities and towns, landscapes and seascapes in Greece and in what today is Turkey that figure in this book. The Sword of the War God, a sequel to Pericles and Aspasia, will appear soon.

Pericles and Aspasia: Two lovers crest the wave of the golden age of Athens: Pericles, statesman and general, and Aspasia, his courtesan, a philosopher’s daughter and a brilliant woman in her own right. In a world of hierarchies, he is at the top when she arrives as little more than flotsam cast up on Athenian shores. Their love transcends social sanctions, enduring and deepening despite the grave threat it presents to Pericles’ reputation as a leader of the Athenian democracy.

The novel unfolds against the background of the arts and history of the Golden Age seen through the eyes of two individuals who lent their particular brilliance to make it “golden”. Pericles, the great orator and visionary of democracy and its most influential woman, Aspasia. Their story takes them from the Agora-Athens’ marketplace-to the Acropolis, from the mercantile, raunchy Athenian Port Piraeus across the Aegean Sea to East Greece. Pericles and Aspasia-together and apart-navigate treacherous paths from venal calculations to impassioned philosophical inquiry, from high-stakes sea battles to the passions of family life.

Pericles and Aspasia engages issues that are vital today-the paradoxes of democracy, the tensions of hierarchy, the ironies of gender, and others-but this novel is immersed in classical Athens: the city, its sunshine, its physical presence, its people and their struggles and aspirations. 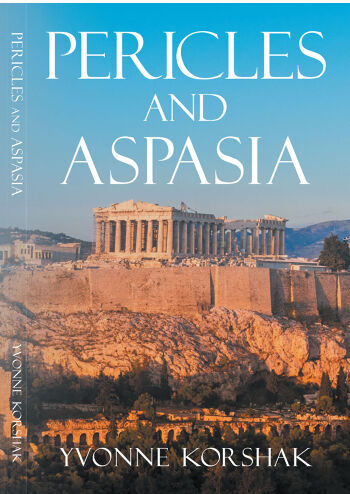 Episode 30: The Development of Roman Theatre

Episode 31: The Stage and the City

My conversation with Dr Palliard was my first interview for the podcast and I certainly felt nervous about having an in depth conversation with someone who had devoted an academic life to the study of theatre in the Greek and Roman period, but Dr Palliard was forgiving of my shortcoming as an interviewer and very generous with her time. In episode 30 she was able to expand on a lot of detail relating to the transition period between Greek and Roman theatre. In the next episode she explained her work on examining the changing behaviors of minor characters in Sophoclean tragedy and how this can be used to investigate changes in Ancient Athenian society.

Elodie Paillard is Honorary Associate in the Department of Classics and Ancient History at the University of Sydney and lecturer/scientific collaborator in the Department of Ancient Civilizations at the University of Basel. She is currently leading a research project on Greek theatre in Roman Italy, funded by the Swiss National Science Foundation. She is the author of The Stage and the City. Non-élite Characters in the Tragedies of Sophocles (Paris 2017).

She is currently co-editing two forthcoming collective volumes, one on Greek Theatre and Metatheatre: Definitions, Problems, Limits, which was published in November 2021, and one on Theatre and Autocracy in the Ancient World. In parallel to her interest in ancient Greek theatre, she is also working on the social structure of Classical Athens and the emergence of democracy. 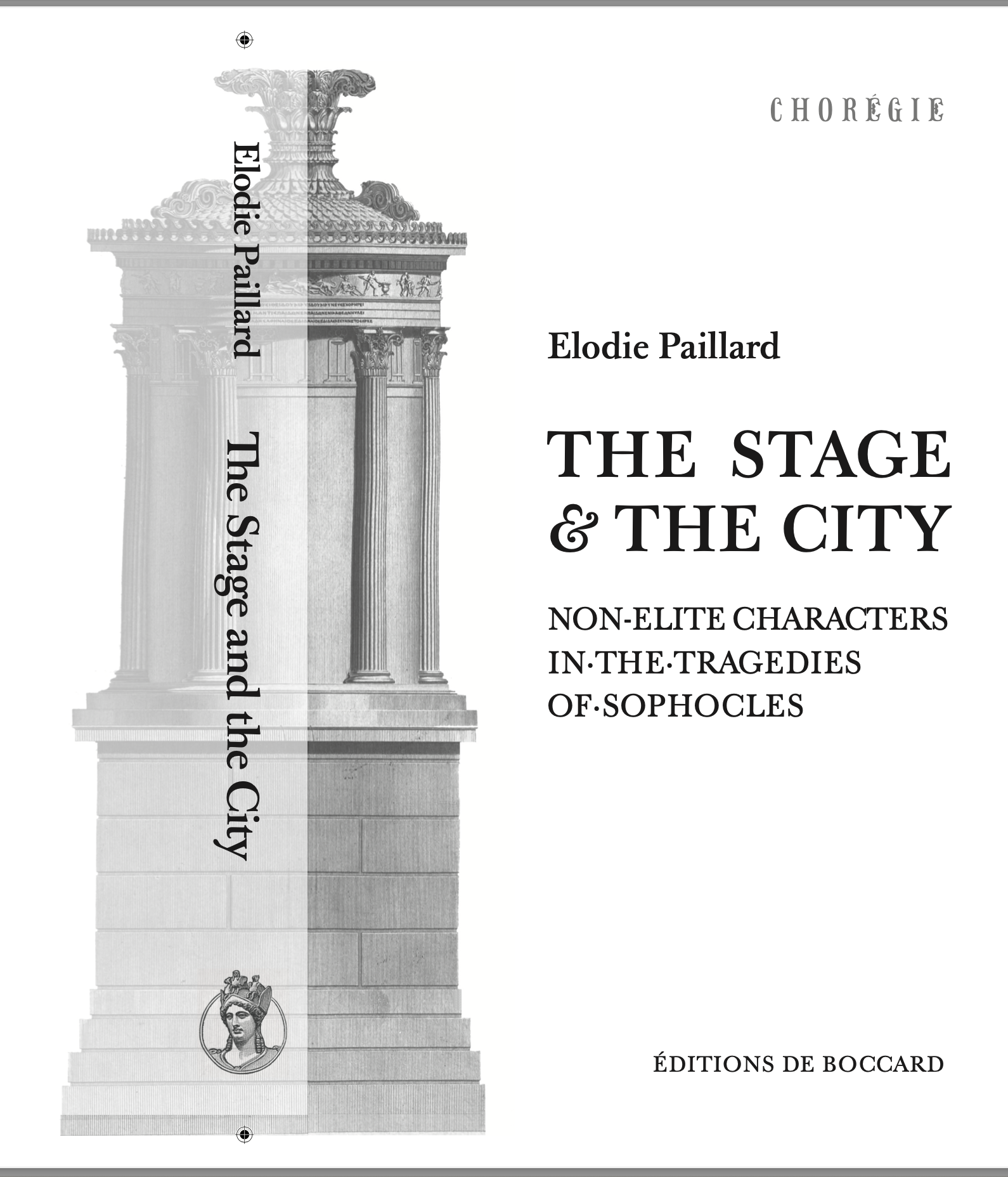 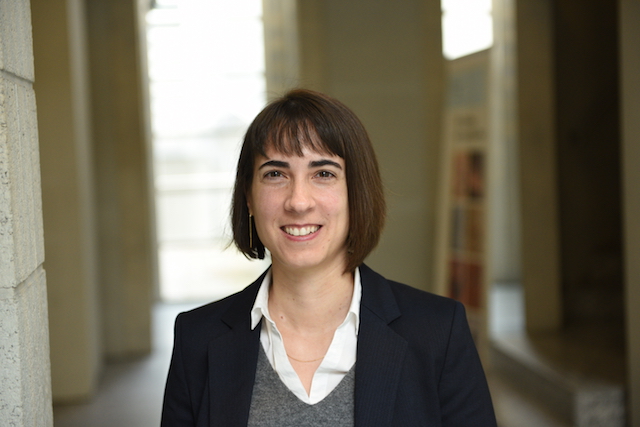 Episode 32: The Trackers of Oxyrinchus

I was pleased when I discovered that Jimmy had directed Trackers because I had been listening to him discussing Shakespeare with Alexandra Evans on their In Quarantine… podcast. It was the first time that I had been able to speak to someone who had worked on a Greek play and Jimmy was very eloquent when remembering the challenges and pleasures of putting the production together. Jimmy was also able to talk about the reaction of Playwright/Adapter Tony Harrison, who attended a performance at the Finborough Theatre

In 2014 Jimmy formed Proud Haddock with James Ahearne. The company specialises in unearthing stories from the past while finding relevance today. Past productions include Charlies Aunt, The Skin Game, Billy Bishop Goes to War, Square Rounds (also by Tony Harrison), The Dog Beneath the Skin, Mrs Orwell, Julius Caesar, A Naughty Night With Noel Coward, and A Subject For Scandal and Concern. 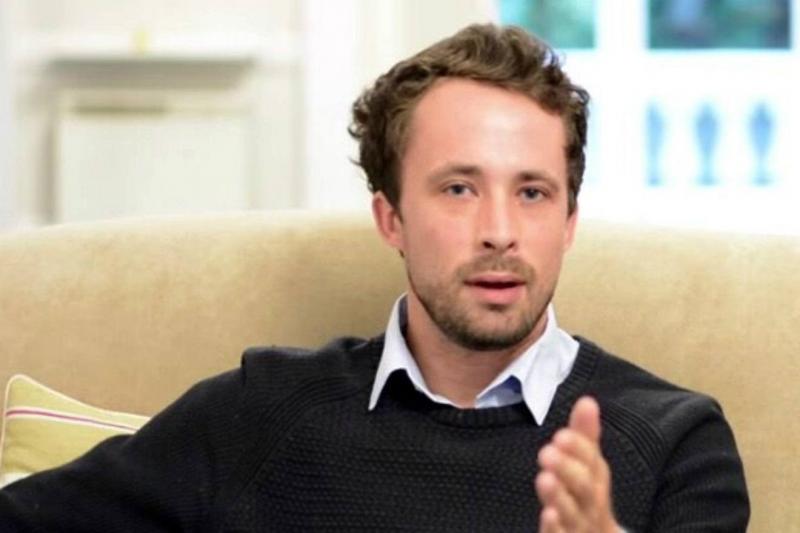 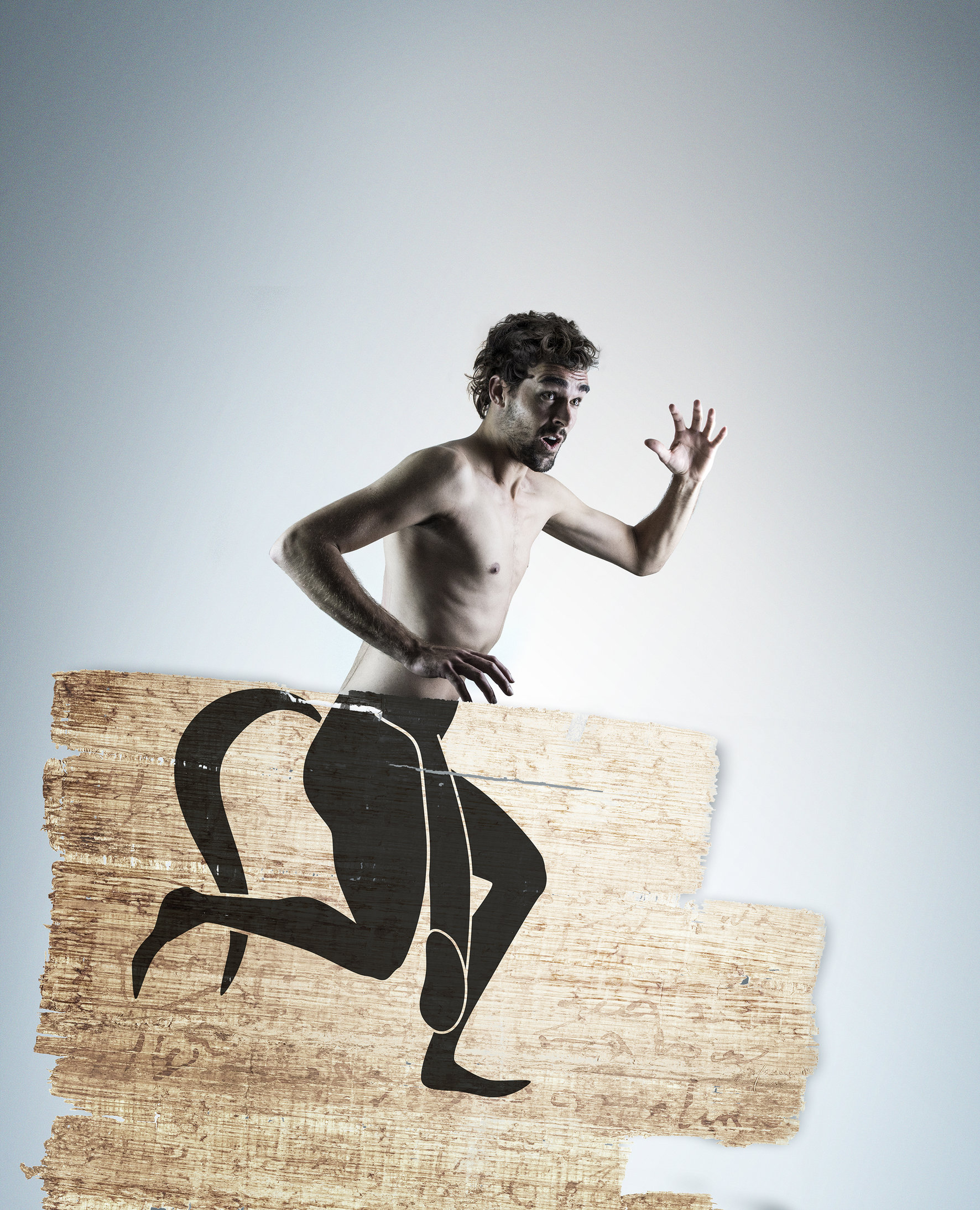 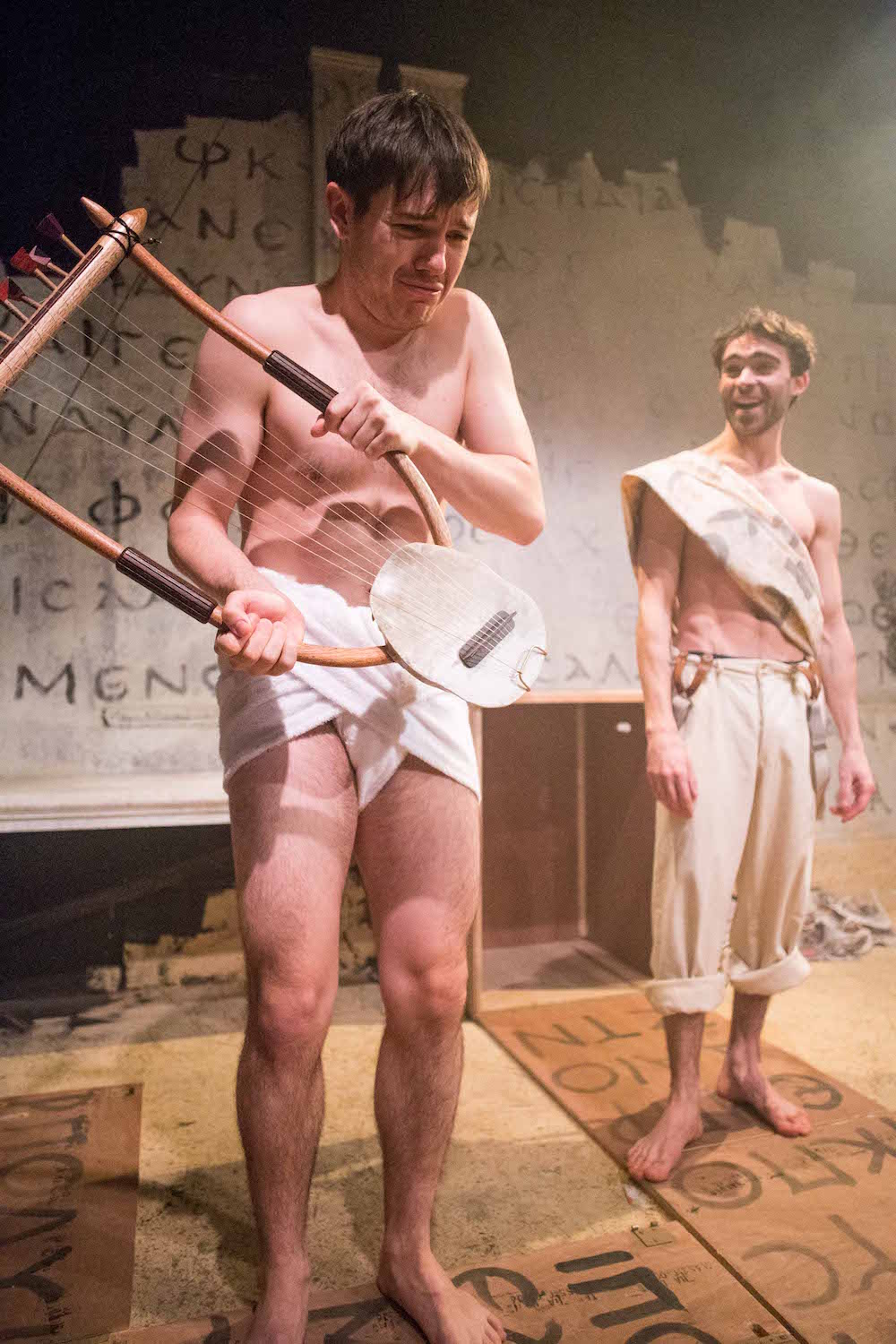 Bonus Episode 7: Greek Theatre and Before.

Rosie has a masters degree in Social Anthropology and is a performer, podcaster and general all round creative person. Rosie and I got in contact through our interest in theatre podcasts and even after a short chat it was obvious that Rosie would be able to talk about Greek and other early performance styles in an enthusiastic and engaging way. I particularly liked the way she drew connections between the different eras using her experience of anthropology.

Her own podcast is a wonderful mix of performance related audio experiences and well worth a listen. You can find Yorick Radio Productions on all good podcast Apps and on Facebook

Yorick Radio Productions brings you Radio plays, Documentaries, short stories and whatever else happened to float through their brains at the time. Some of Yorick Radio’s regular shows include: Theoretically theatrical: A documentary style show about theatre, creative pursuits and behind the scenes. Scintillating Stories: Where we read short stories. Page Parle: Where we interview authors and performers. Radio Revelry: Where we perform Radio plays. 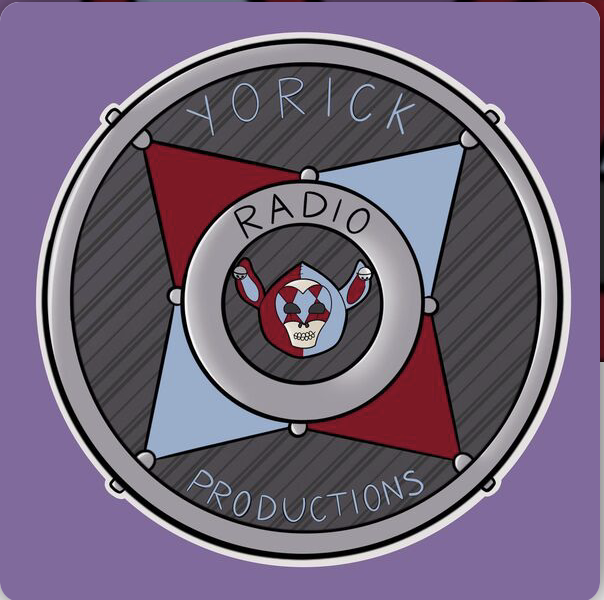 Bonus Episode 8: The Actors of Dionysus

Once I had started looking on line for recent performances of Greek Theatre I soon came across Tamsin and the Actors Of Dionysus. Tamsin is a passionate and enthusiastic (and very very busy) theatre maker and performer, but she managed to squeeze in some time to talk to me and discuss the perils and joys of producing Greek Theatre. You can find her and the Actors of Dionysus on Twitter and on-line. They have an excellent website with lots of information about their past and current productions.

Tamsin trained at Oxford School of Drama and Ecole Philippe Gaulier before re-training as an aerialist at National Centre for Circus Arts (formerly Circus Space). She is Artistic Director of aod (Actors of Dionysus) a theatre company that specialises in new adaptations of ancient Greek drama and new writing inspired by myth and for them she has worked as a performer, producer, director and movement coach.

She is a passionate theatre maker and continues to develop her performance craft, by participating in workshops, masterclasses and residencies including writing, theatre, aerial and singing, most recently with Company of Wolves (Bone Song) in Glasgow working with Anna Porubcansky and with Theatre Foundry (Viewpoints Intensive) in London working with Helen Tennison. She is a member of Brighton based world music choir Vocal Explosion who regularly performs at festivals and events. 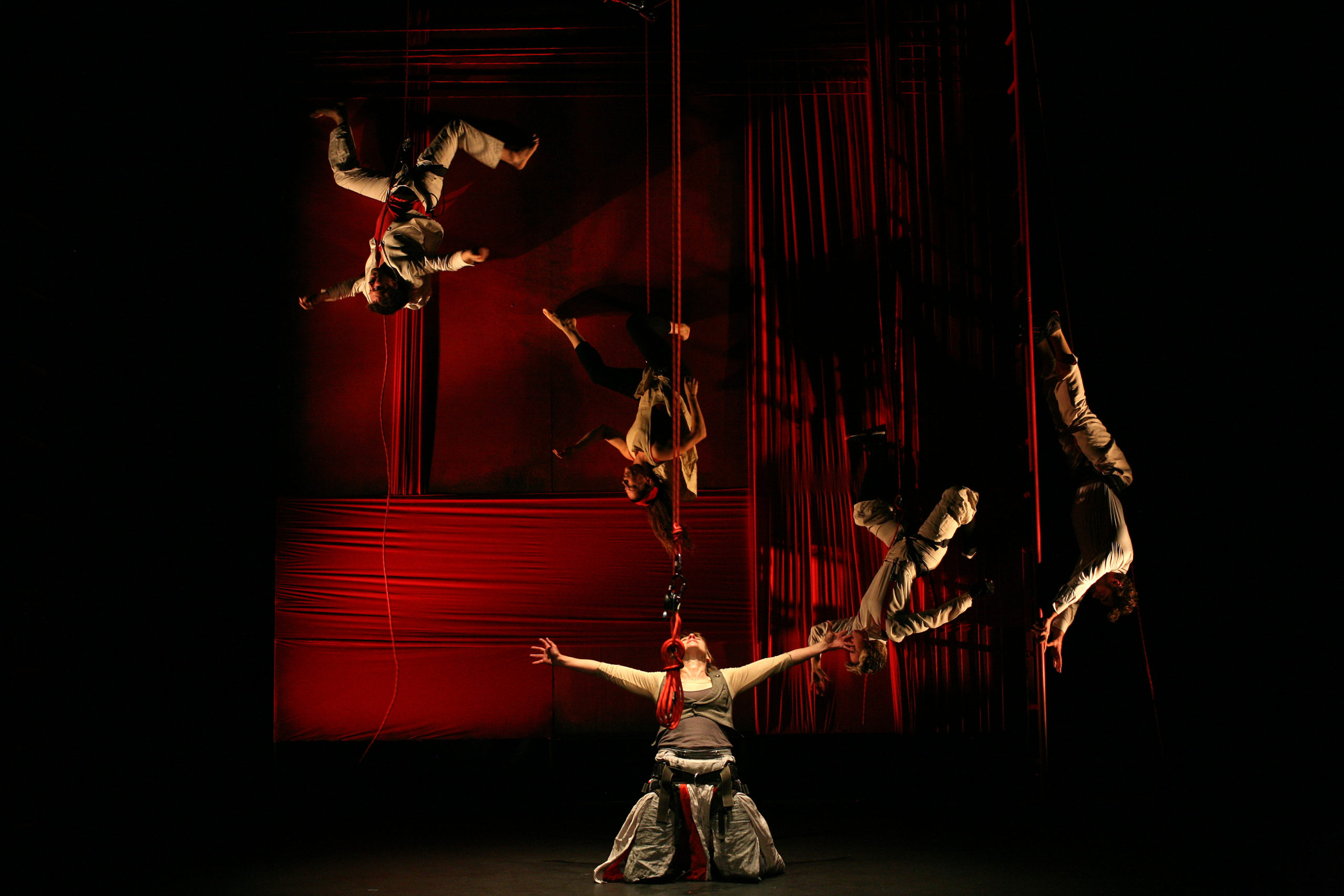 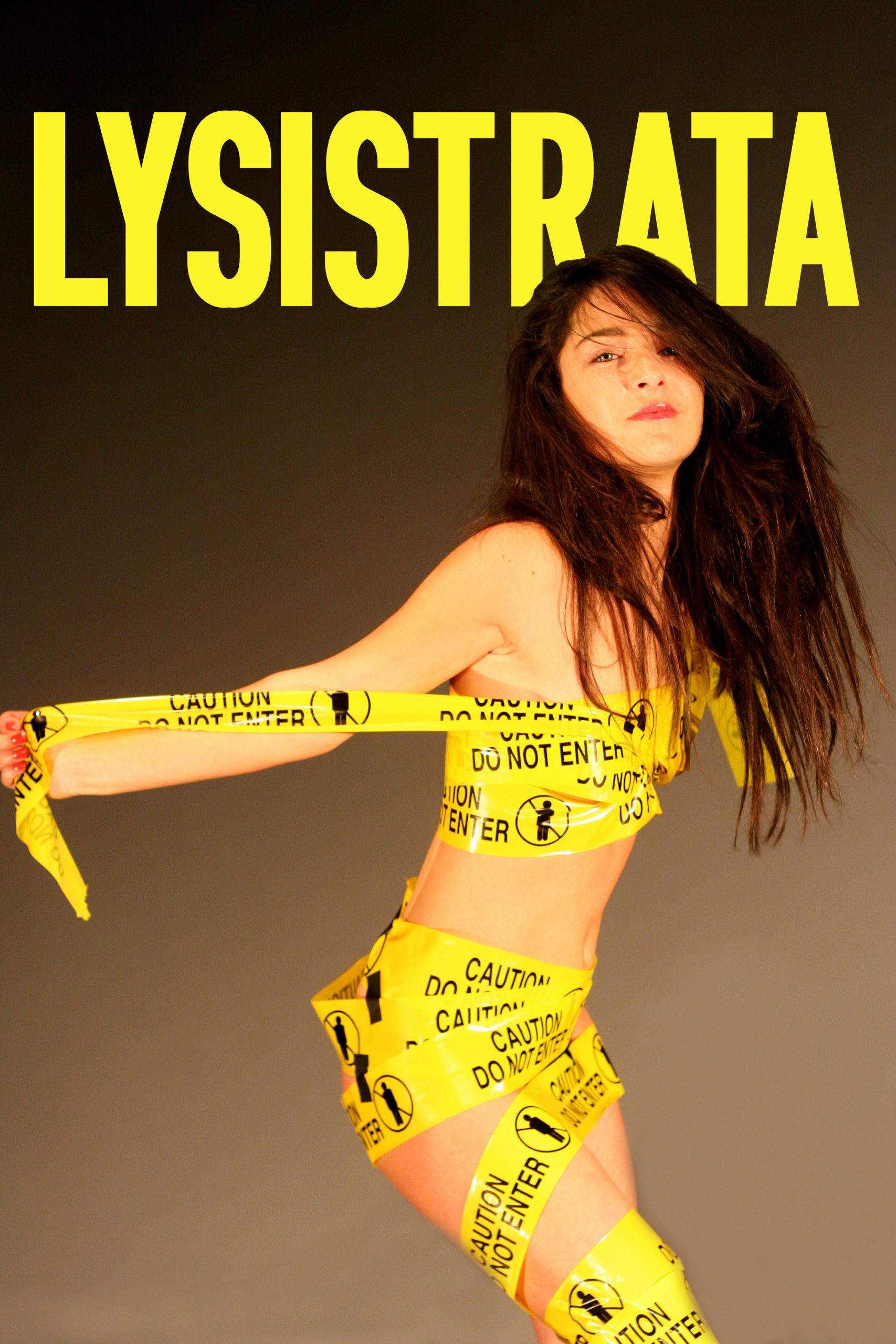 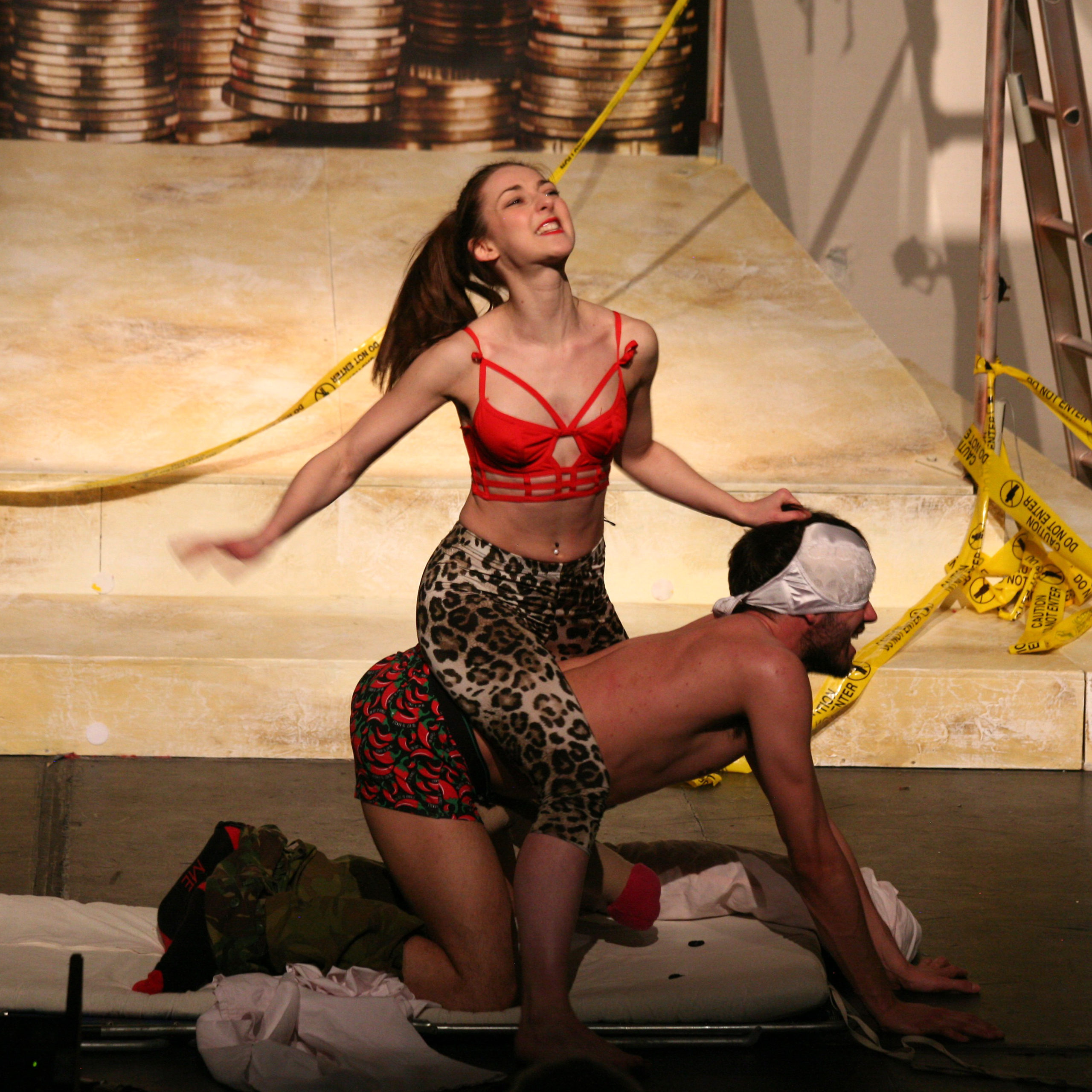 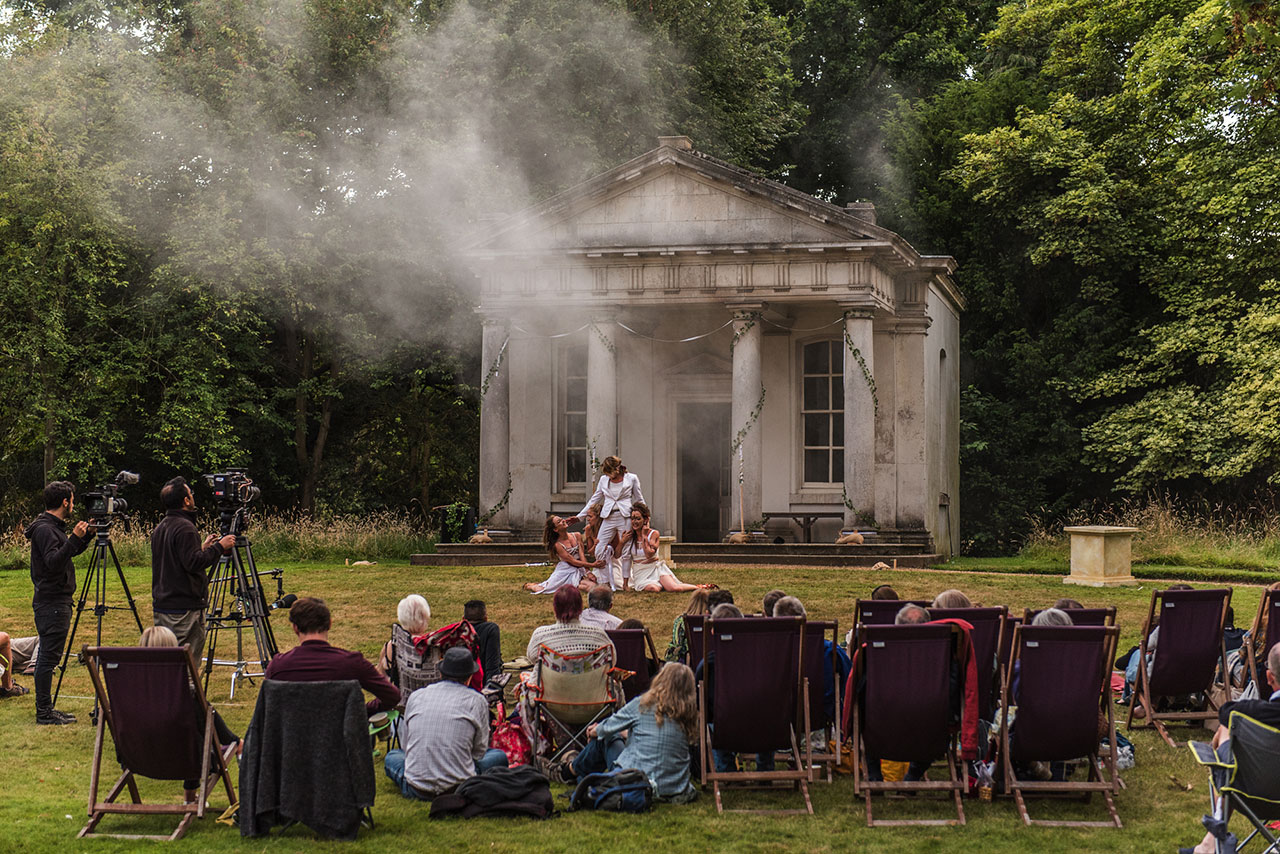 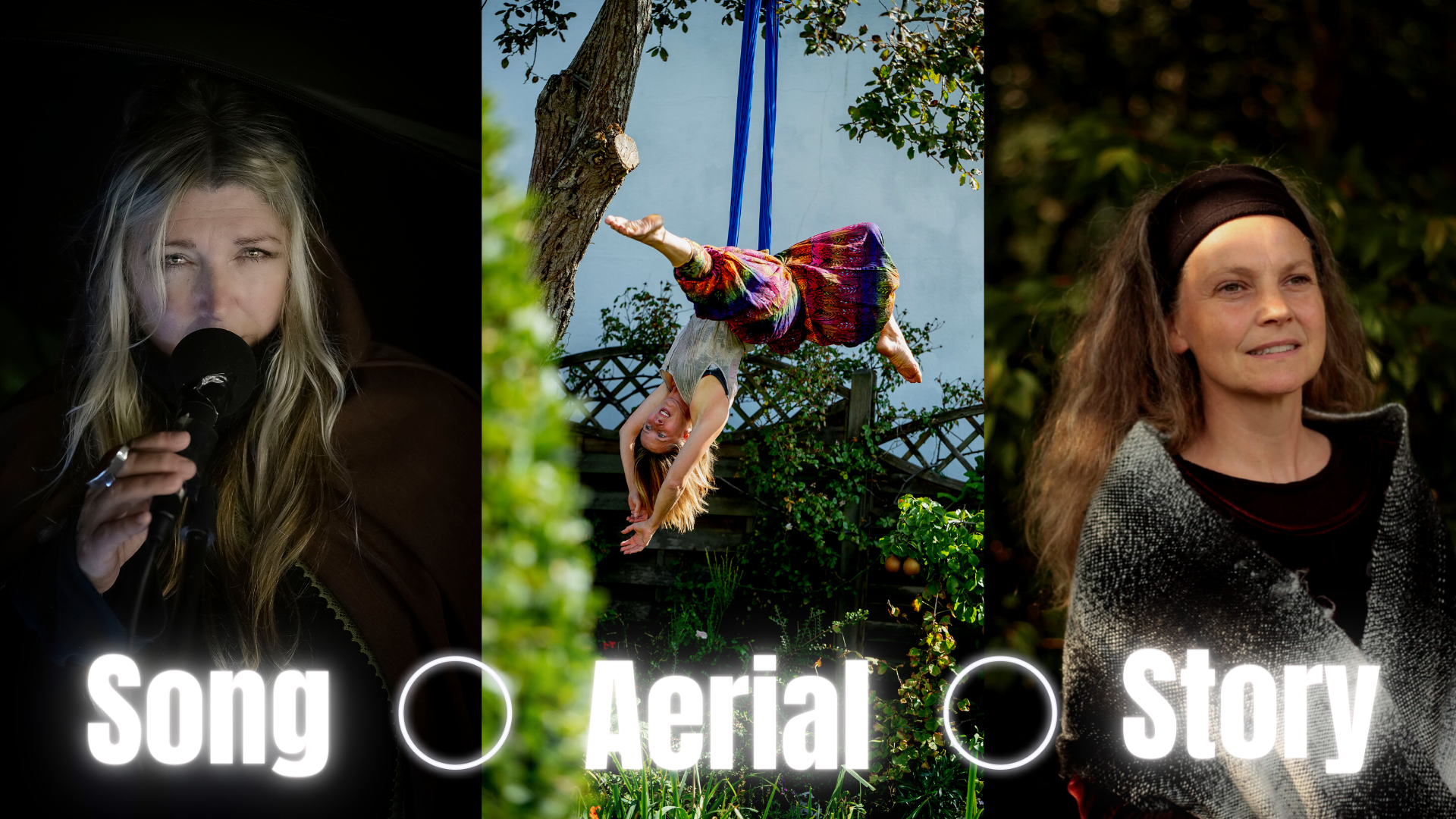 Like all my guests Ricky brims over with enthusiasm for theatre and particularly for productions of lesser known classics. As he put it during our conversation plays can exist on the page, but have to be performed to be kept truly alive. Keeping lesser known plays alive is quite a task, not least because of the challenges of large casts and large performance spaces, but Ricky and his team at Lazarus Theatre are dedicated to finding innovative and thoughtful ways of presenting plays for the modern audience.

Ricky founded Lazarus Theatre Company in 2007 and has been Artistic Director since. He has directed over 30 productions for the company. In addition to his work with the company he also is a freelance director and practitioner working across a range of drama training organisations as well as offering text and audition technique workshops. 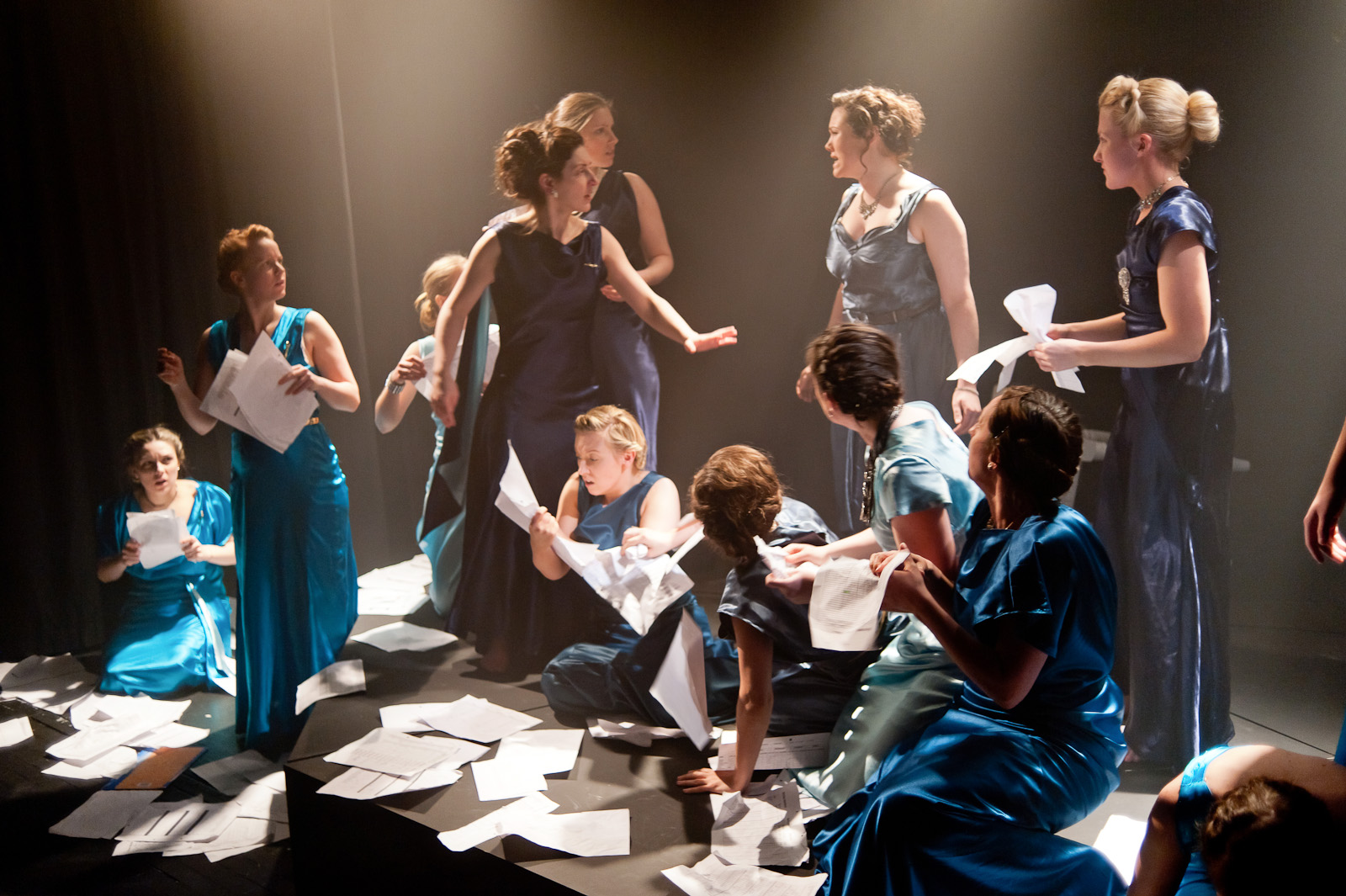 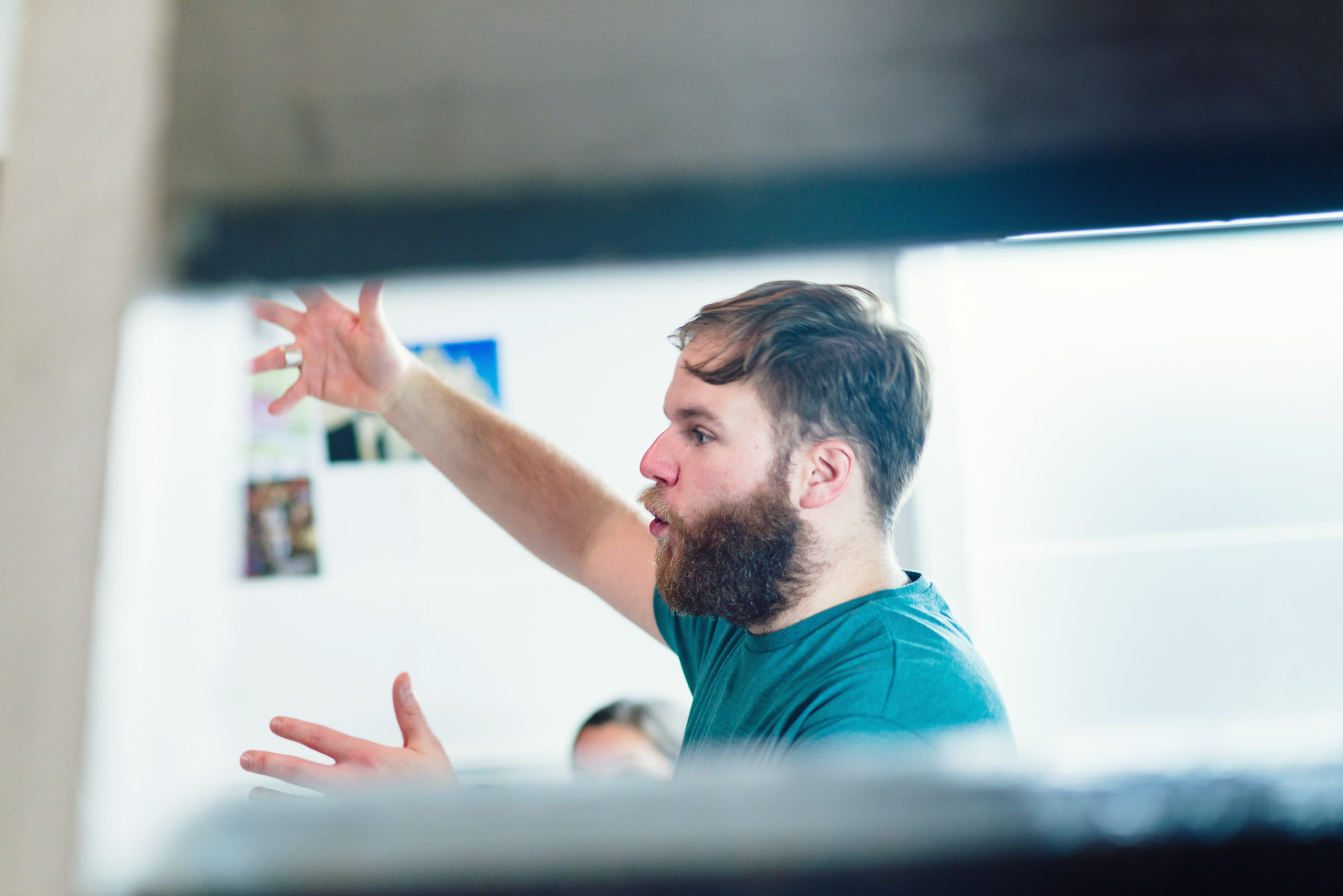 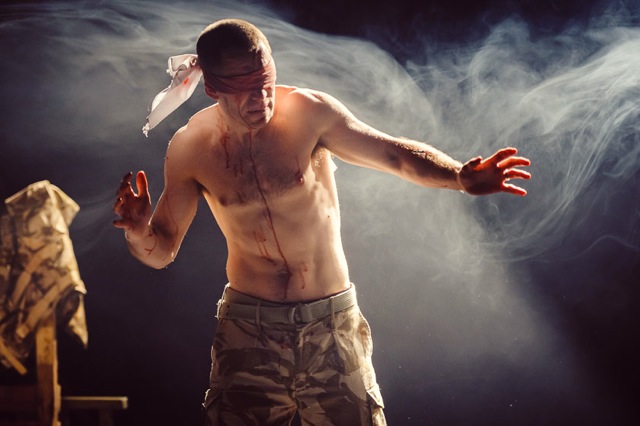